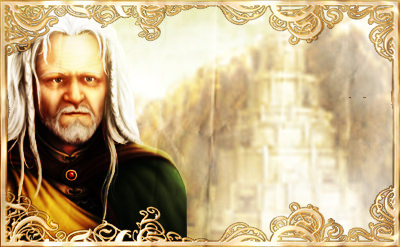 If you haven’t handled naval campaigns where your nearest opponent is 4-5 turns of sailing & marching away, they take a LOT of planning and even MORE patience, which means if you plan to have a military presence, you should start the logistical work now.  So I thought I’d put in a few tips here as I’m very experienced with them, my two cents, then do whatever YOU want!

A typical distance naval campaign takes 2-5 turns of recruiting and logistical arrangements of forces at home, then 3-7 turns of sailing & marching to get to the destination.  And you want to make very sure that you can land your troops AND sail your ships homeward for the next campaign!!   Newbies often simply arrive and march off, leaving their ships on the ground and useless.  Experienced players always plan to bring them home right away.

Let’s look first at the Big Picture.  Say you are in Forlinden planning to attack into the south: Harad, Umbar or perhaps whatever kingdom rules in the Gondor area.  Depending on how many troops you have so far, you might be 6-7 turns from arriving anywhere, taking into account both the preparation plus the sailing (& possibly marching) to attack.

So you first calculate how many transports you have to work with, including however many you plan to build on the turn you will set out.  One of those transports will be reserved for taking the rest of the ships home in order to let you send a second wave of troops.  So the total number of troops you will invade with is the remaining number of transports, times 250 for infantry or 150 for cavalry.  If you plan a mixed invasion force of both infantry and cavalry, make sure you do that math right!

Suppose you will have 21 transports and you are only recruiting Heavy Infantry (HI).  Taking 1 transport away (which can carry 100 Men-at-Arms, say), that gives you 20 transports which can carry 5000 HI.  Let’s assume your starting point is a city at, say, 0408.  And that you don’t have the SNA that lets you travel open seas safely.  And let’s also say that you want to invade at 2632 and you want minimize your sailing time.  Of course, if you have infinite food, you can simply sail there with one big navy and one 1-transport navy and arrive in four turns; but that means 10,000 food.  If you have it, great!  No need to read further!

The rest of this article is about how to get there in four turns with very little food.

The first thing to do is to work out how to recruit those 5000 ASAP, by splitting off recruiting armies to commanders who march out to outlying cities, major towns or towns.  But you also have to  plan what happens when they all come together, so that you have

However, if there is an enemy army at 2632, you don’t want to risk having the Navy 1 commander be challenged and killed, so you may be stuck there refusing challenge and picking up the ships which are anchored during battle, and then sailing off next turn.  So you may want to plan ahead to have Navy 1 have a subcommander as well, so that both the commander and subcommander can try to pick up the ships and sail off, so that you don’t risk enemy agents coming in on that turn and potentially destroying your ships by assassinating Navy commander 1.

Depending on how much opposition you face in the area, you may want to plan the logistics for the next invasion.  Because this requires at least 4 navy commanders, and possibly 5, if you don’t have 4 more besides the ones you sailed down, you might want to send one or two homeward.  By the time you arrive, you can have recruited another 5000HI and send them down almost right away!

Lastly, of course if there turns out to be an enemy NAVY at 2632, then you are in for a navy battle, and you hope you brought enough warships to win it!