So this was my first game back into ME properly.  Rob showing me the ropes again, so best way to learn is to play uh?  So I must say it was a great game, full of ups and downs.   Start didn’t go well with a loss of 3124 to a successful threaten  as I decided to go for some early burns along the Northern mountains of Mordor.   Lost pretty much the entire eastern branch of PCs but retook them slowly having blown the bridges.  In Mordor managed to take out 3627 and failed at 3528 due to a dragon wielding CL army (Ji Indur running an army!)

Lost the 3116 chain of Pcs but also retook them by which time the Rhudaur was out of the nw and I thought that won, until argh Arthedain out.  So a campaign with NG and Dun troops to halt the Rh/WK folllowed by hunting the WK capital for turns after that.

Noldo agreed, via a diplo to take out the Arthedain capital but I ended up sacrificing my army there.  Wk run riot in Cardoplex for a few turns, and the Rhudaur even made it as far south as the Dun capital   In Mordor the DS had recovered from their original hit, with 3221 being a city Fort for over a year of game-play despite many attempts to take it!

At this point Harad turns up in Mordor and takes out the CL capital, and 3629! the SG makes one of a only a handful attacks into Mordor and takes 3124 mid-game putting the DS on the back foot again.  Never quite worked out what the SG/Eo player was doing though, although to be fair by the end of the game he had an extensive array of pcs.

Mordor then was a slow grind, my Dun agent squad effectively sometimes being “co-ordinated” with similar attacks by the Noldo agents and Ems.  Along the game I prioritised information gains to kill off lots the DS agents gaining some nice items, Row, RoI RoC, Cloak of the Heavens were all mine before some FP agent activity killed off some of my best agents on the final turn! Cough…..

End turns meant keeping the Dog Lord occupied whilst I ran agents all over the place, as I threatened a large number of the DS pcs to the SE of Mordor, dragging agents and killer curse squads to hold me at bay, I thought a great use of “annoyance” tactics.  Finally managed to get my economy back up after nearly dying at one point when the WK/Rh 1817 attack ran out of energy thanks to a nice send of product and gold from the Noldo which was a key turning point for me.

One of the most bloody game I’ve ever played in, true Gunboat gaming at its best with nations on both sides out at various points in the game!

Kudos to the Harad/Noldo player who I thought played a brilliant game, from taking out the Corsair threat in the south to charging into Mordor and taking on the might of the DS with me playing a good second fiddle. 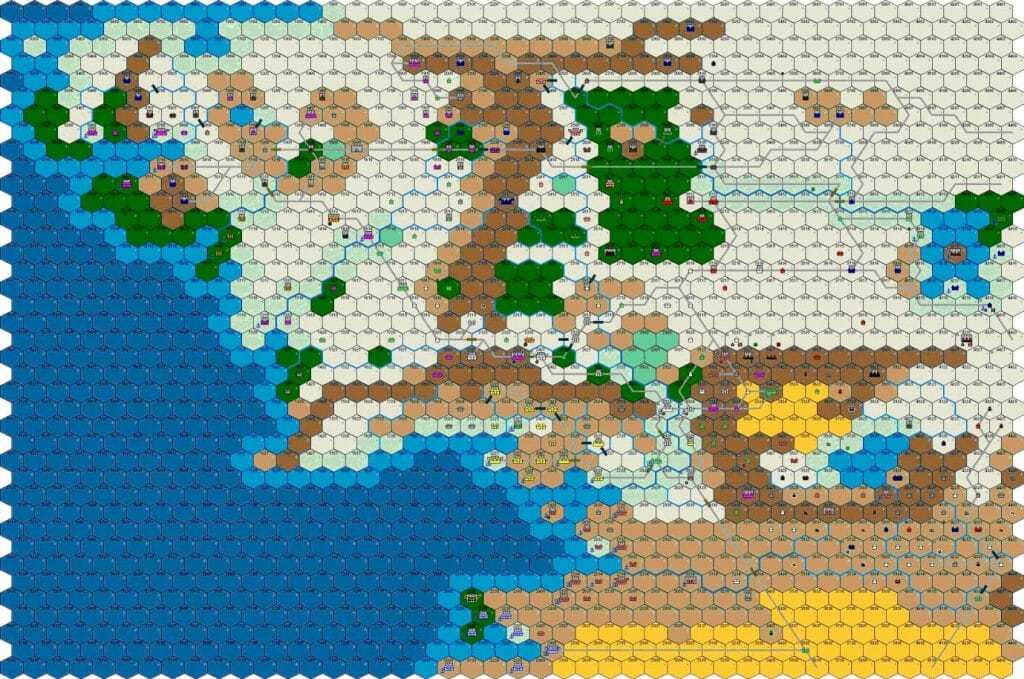