It all began with a drive to the coast.

Which, incidentally, marked the start of John’s employment with the business, since neither Clint or Sam had a car at the time.

And one contract and a car full of old MAC computers later, we were off and running.

Well, staggering, anyway. 12-16 hour days were the norm as we struggled with not only getting to grips with running Middle-earth, but also several other games we had purchased at the time. And this was before the days of JOverseer. All orders were entered by hand, and all results printed on paper and posted out.

But we found Ed and Rob lurking in the local board gaming shop, and signed them up to help out. Things got easier, and we became more stream-lined.

Then we got cocky.

For some reason it made sense to once again take on more than we could possibly handle, and we purchased the rights to the game itself from GSI, inheriting new licences, a raft of related problems, and – on the plus side –  Stuart, the US GM who liked us so much he moved to Wales to help out.

And again on the plus side, it meant we could – and did – design new modules and game variants. Battle of the Five Armies, Untold War, Kin-strife and others. John was elected to become our Tolkien expert, and from that point on spent much of his time pointing out why Tolkien wouldn’t approve of any number of design decisions Sam and Clint were making. Compromises were reached, modules were created. 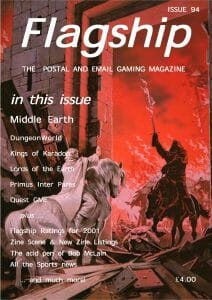 At one point there were over 70 games of Middle-earth running. And this was, perhaps, the golden age of PBM. Conventions around the country, dozens of successful companies each with their own stable of games, and of course Flagship magazine, with Carol and Ken keeping a parental eye on things. They are still missed.

Our own games included not only Middle-earth but, at one time or another, Legends, Serim Ral, Amaranth, Exile, CTF2187, Crack of Doom, Iron and Steam, Battle for the Planets, Star Quest and Premier Football. Not all were classics, but all had something to teach us about how to design games, or indeed how not to design them.

Then we got cocky.

This was around the time social media was just beginning to blossom. Middle-earth was running smoothly, with many aspects of the process automated, so we left it in the capable hands of Rob, and turned to Facebook.

Under a new company, Microcosm, we created several games, including several set in Middle-earth. The first, called The One Ring, was – and we say this in all humbleness – a fantastic game. Complex, rich in flavour, with great artwork, text, vocal acting and music, it promptly bombed. Because it transpired that what Facebook gamers wanted wasn’t complex, rich in flavour games, but something where they could log onto and press buttons mindlessly for a few minutes a day.

The next game – also called The One Ring, because why mess with the classics? – catered to this, and proved a success. It also required John to re-write the entirety of Lord of the Rings so as to have a single, linear plotline with a single hero, and the text split into two sentence chunks. We fear this broke him, and he has never been the same since.It was not only a success, it was too successful. It attracted the attention of bigger fish with even bigger lawyers, who took away our licence to run games set in Middle-earth on Facebook. Not all was lost, though, and, if John wasn’t broken enough, Sam tasked him with re-writing the entire game in a new setting, the Mythic Isles. But whilst the result was again pretty successful, and ran for several years, by this time Facebook games were losing their mass appeal.

The One Ring Gameplay Trailer

It had been an interesting few years. We had negotiated with Nokia, Sony Ericsson and Warner Brothers, among others. We had the honour of including game-designer legend Ian Livingstone on our board of advisors. We had even tried our hand at tie-in games, creating a puzzle game for the hit TV show Hinterland.

But it was time to move on. Or, in our case, back to our roots. Ed returned to running Legends, and Clint to playing a more active role in running Middle-earth, followed –  after a brief stint editing a Hollywood screenwriting magazine with Sam – by John. 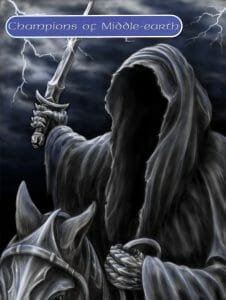 Since that time we have greatly increased the number of games running, given our websites an overhaul, and written a brand-new two-player module, Champions of Middle-earth, which we are demoing here this weekend. We are very pleased with it, and, of all our modules, probably comes closest to recreating the decisions faced by characters in the books.

Which brings us up to date. 20 years in the business and counting. And despite constant predictions throughout that time that computer games would be the death of pbm, we’ve found that this is simply not the case. The great pbm games – and we are proud to consider Middle-earth among them – have stood the test of time. Players have grown up and indeed grown old with us, and now their kids are playing the same games.

And will Middle-earth still be around in another 20 years? Don’t bet against it.